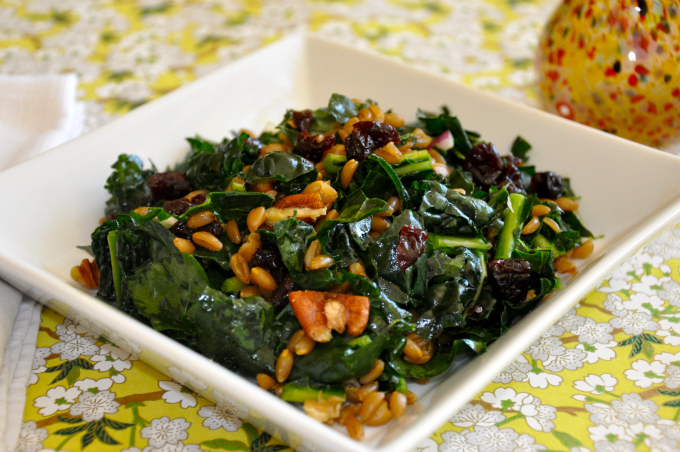 Today I would like to introduce you to my favorite grain called farro, also known as the “Mother of All Grains”.

Farro is rich in fiber, magnesium and vitamins A, B, C and E. Because it is so easily digested and so low in gluten, farro can often be eaten by people who are normally gluten-intolerant.

When added to this kale salad, you have a nutrient dense meal that will keep you going all day.

Farro is an ancient grain used for thousands of years in North Africa and the Middle East, where farro kernels have actually been found in Egyptian tombs.

During the height of the Roman Empire, farro was used as a primary food and possibly even as money. When cooked, farro has a chewy, slightly nutty finish. It  has 4 grams of protein per half cup cooked.

In comparison quinoa has 4.5 grams and brown rice has 2.5 grams per half cup cooked. It is loaded with magnesium, niacin and zinc and is low-fat. Make sure you get “semi-pearled farro” or “pearled farro”.

“Whole farro” takes about 40-60 minutes to prepare. The “semi-pearled” or “pearled farro”will take 15-20 minutes off your cooking time.

I always rinse the grain before cooking.  Cooking it is simple, just simmer one part whole-grain or pearled farro in about 5 parts water until it is chewy – drain any excess water or let it absorb all the water until it is cooked like rice.

Cooked farro will keep in the refrigerator for approximately five days. You can eat it warm for breakfast with maple syrup and nuts, and in soups. I love it cold in salads like this kale salad with farro, pecans & dried cherries I made today.

This super yummy power salad is easy to make and  low in saturated fat, and cholesterol.

It is also a good source of dietary fiber, thiamine, riboflavin, folate, iron, magnesium and phosphorus, and a very good source of Vitamin A, Vitamin C, Vitamin K, Vitamin B6, calcium, potassium, copper and manganese.

If that isn't enough, it also has over 5 grams of protein per serving! Enjoy and congratulations to our newbie vegans.

Hope you enjoy this kale salad with farro as much as I did.

2 thoughts on “Kale Salad with Farro, Pecans and Dried Cherries”