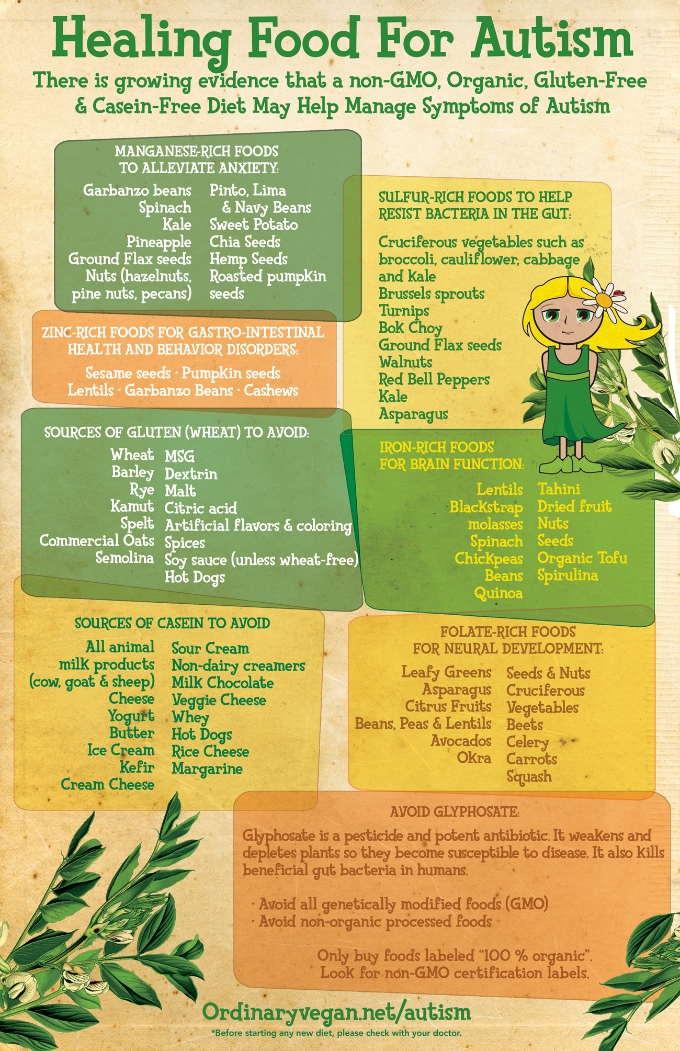 “All disease begins in the gut”
~~Hippocrates 460 BC

I would like to preface this posting by saying I'm not an expert on autism, but I have done extensive research on the connection between autism and diet. I know this is a very emotional subject and I take it very seriously.

Diet may not cure autism, but there is no doubt in my mind that it can help alleviate symptoms in some children with autism spectrum disorder and ADHD. I also believe there are chemicals that we can avoid to minimize risks of autism. Hope this information helps.

As the number of children with autism spectrum disorder increases, scientists are scrambling to determine the reasons why. According to the Centers for Disease Control and Prevention, one in 68 U.S. children has an autism spectrum disorder (ASD). ASD is almost 5 times more common among boys. Even more alarming is the prevalence of autism in U.S. children has increased 119% since 2000. Autism is on the rise and it's now the fastest-growing developmental disorder in the United States.

Dr. Stephanie Seneff, a research scientist at MIT, has been studying autism for decades. Dr. Seneff focuses her research on gut health and the connection to autism. Based on her studies, she issued a warning that half of all children in the U.S. could be autistic by 2025.

Dr. Seneff isn't the only one concerned about the connection between glyphosate and disease. The World Health Organization (WHO) issued a warning about glyphosate's possible links to disease.

Many European and Latin American countries now ban the herbicide. Creator of the herbicide, Monsanto, demanded that WHO retract the report, but they refused. Now additional studies are discovering links between the increase in gluten disorders and glyphosate.

So what is glyphosate? Glyphosate is an herbicide used to kill weeds. Monsanto brought it to the market in the 1970s under the trade name Roundup. Farmers use glyphosate to kill weeds without killing their crops. Glyphosate is distributed worldwide by agrochemical companies like DuPont and Monsanto.

Glyphosate can be hidden in many foods including wheat, milk, canola oil, corn syrup, and soy. It can be found in all non-organic processed foods. Glyphosate can also be traced to animals fed GMO corn or soy.

Gut disorders are one of the most common medical conditions associated with autism. The CDC found that children with autism are three to five times more likely to suffer chronic gastrointestinal disorders.

Researchers also found a link between gut disorders and autism severity in children. Toxins produced by abnormal gut bacteria may trigger or worsen autism in children.

Dr. Seneff's research shows that glyphosate works as an antibiotic that kills good bacteria in the gut. This allows pathogens to overgrow and cause disease. It also interferes with essential minerals like iron and manganese.

We depend on the mineral manganese to alleviate anxiety. Anxiety disorders in children with autistic spectrum disorder are common. They can include phobias and obsessive compulsive disorder. Glyphosate also depletes serotonin. Serotonin plays a key role in bowel function, gut health and mood.

The good news is that some autistic and ADHD children's gut bacteria problems can be helped with a gluten-free, casein-free diet (GFCF).  Many parents who have followed this diet have reported significant improvements in their children's behavior. Why casein free? If you are not familiar with casein, it is the primary protein in cow's milk. Many children with autism lack the necessary enzymes to break down the casein in their gut.

Gluten, on the other hand, is sometimes harder to avoid. Gluten hides in many common foods like soy sauce, hot dogs, and condiments. Studies have confirmed an association between gluten sensitivity and autism. Gluten sensitivity can trigger bowel disorders and digestive symptoms, including bloating, constipation and diarrhea.

Eating the right food is essential. There are many healthy substitutes for cow's milk including non-dairy almond, coconut or gluten-free rice milk. There are also some excellent casein-free cheese options. Make sure you always check the ingredients. Casein hides in the strangest places. Gluten-free foods are pretty easy to find nowadays. Just be careful about any store bought processed foods with hidden ingredients. Always buy organic and avoid all GMO food. GMO seeds have been genetically engineered specifically to withstand glyphosate. The majority of GMO food has been treated with glyphosate. Glyphosate also resides in many common foods including sugar, wheat, corn, and soy. Try to avoid all processed foods which contain those ingredients

I also recommend a diet rich in manganese and sulfur. Manganese is found in garbanzo beans, spinach, pineapple, and pumpkin seeds. The mineral manganese helps regulate blood sugar levels and alleviate anxiety. Sulfur rich foods include cruciferous vegetables, such as broccoli, cauliflower, cabbage, and kale.  Brussels sprouts, turnips, and bok choy are also rich sources of sulfur. Sulfur helps resist bacteria in the gut. Gut bacteria living in the intestines has also been linked to depression.

The best part of this diet plan is there's no downside. A mineral-rich diet can enhance overall health and help prevent many other common diseases.

We don't have all the answers yet. More research is necessary. But healthy, organic, mineral-rich food is a great place to start. Always remember, you are what you eat. If you plan to make these diet changes, please speak to a nutritionist who specializes in GFCF diets. You can learn more about the GFCF diet on the Autism Research Institute website.