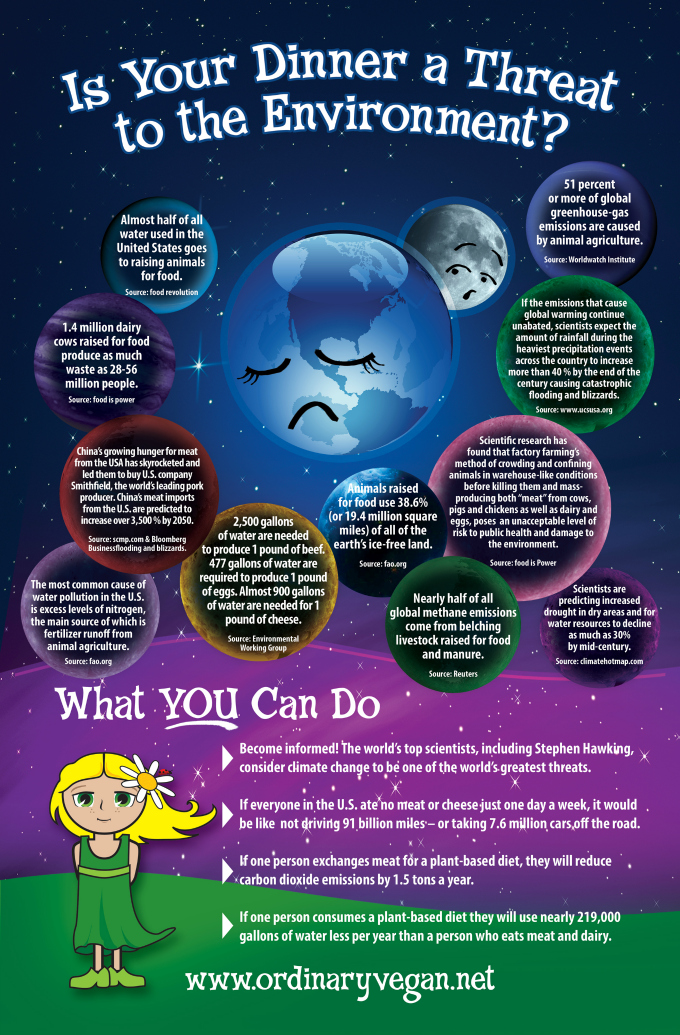 Climate Change – Is Your Dinner A Threat To The Environment?

I woke up angry today. Disastrous images from last week's news were still in my head. I watched families lose loved ones, total neighborhoods destroyed and residents fleeing from their homes as waves of floodwaters rose menacingly around them.  This was the result of flash flooding from record breaking rain in Texas and Oklahoma.

Between me and you, time is running out. Our planet needs our help. We can’t continue to sit our hands and not take responsibility for the choices we make and the impact it has on the environment. Your children deserve better. You deserve better.

And if you think Mother Nature is going to find a way to balance this out for us, you are wrong. The fact is, we are in the throes of climate change and things aren't looking up.

These temperature changes play an important part in shaping weather patterns and guiding the life cycle of various organisms. Shifting the temperature of the earth even a couple of degrees can throw an entire ecosystem into chaos and create extreme weather events.

The world's top scientists, including Stephen Hawking, consider climate change to be one of the world's biggest threats.

Last week I was talking to a friend about climate change. When I mentioned the impact that the meat and dairy industry had on the environment, she said she never knew that.  I was surprised.

But when I thought more about it, I realized that I watch the news every day and I very rarely see a story on climate change.

So I would say the most powerful way that the average person can fight climate change is first and foremost, become more informed. Don't trust the media to keep you educated. Do your research on climate change. Know which government officials are looking out for you and which officials are being funded by businesses who are polluting our earth.

The meat and dairy industry give millions of dollars in campaign contributions to members of Senate and House Agricultural committees. Smithfield Foods was one of the top contributors to Republicans and Democrats in 2014.

Smithfield, the largest pork producer,  is now owned by the Chinese and was bought to keep up with China's demand for meat. China's meat imports from the U.S. are predicted to increase to 3,500% by 2050. Think of the impact that will have on the U.S. environment and our government approved it.

If you care about the earth and your family's future, start making changes today. Eating plant-based food even day a week can help save precious resources.

Eating a plant-based diet full-time will not only lead to a healthier, longer life but also ensure a healthy environment for current and future generations. Climate change can still be stopped and it all starts with your dinner tonight.

1 thought on “Climate Change: Is Your Dinner A Threat To The Environment?”