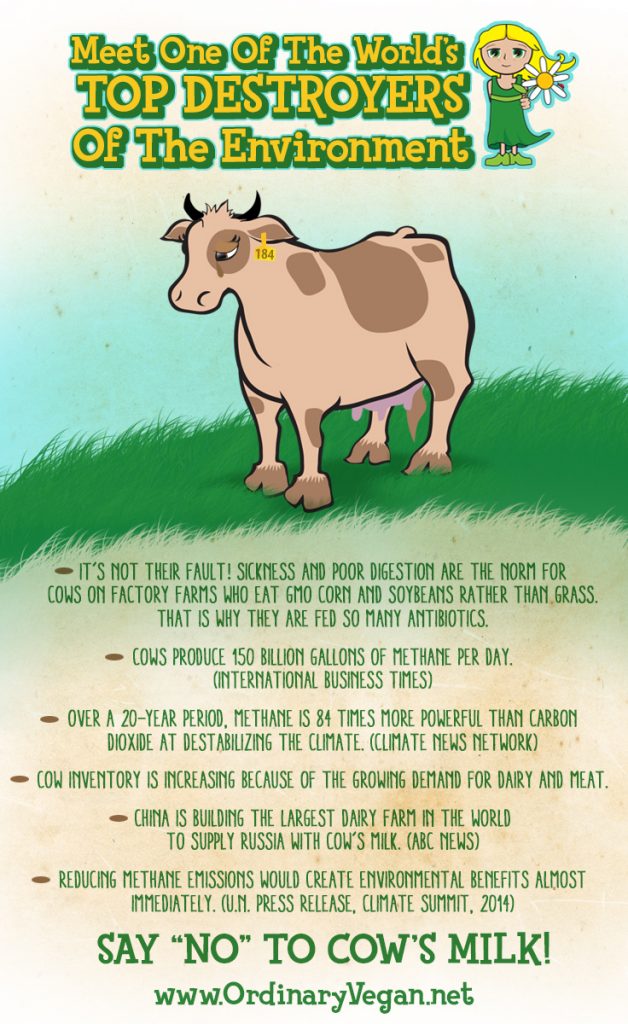 Methane & Giving Up Cow's Milk
To Help Save The Planet

April is Earth Month. This lovely spring month is the perfect occasion to begin making changes to help protect and preserve the environment.

I know environmental issues can seem overwhelming, but there is something we can do that can have a dramatic effect on the environment. We can change our diet.

I talk a lot about cow's milk because of the wealth of evidence that it can harm your health. But today I would like to discuss how cow's milk, specifically methane from cows, harms our planet. If you are not familiar with methane, it is a colorless, odorless chemical compound.

In its natural state, methane is found both below ground and under the sea floor.  When it finds its way to the surface and the atmosphere,  it is known as atmospheric methane. The Earth’s atmospheric methane concentration has increased by 150% in the last 150 years.

Milk is produced in all 50 states in the U.S.

Dairy products range from milk, cheese, yogurt, butter to ice cream. The United States is the largest producer of milk in the world, followed by India and China.

The traditional approach to dairy farming used to be small farms which had a herd of about 100 milk cows. Those families operating the farm provided most of the labor and grew most of the feed on their farm.

When milk prices became artificially low, small farmers had to become vast and industrial or give up dairy farming. The reason behind the low milk prices had nothing to do with demand. Milk prices are mostly determined by federal policies and state dairy programs.

But even as the number of dairy operations disappeared, the number of dairy cattle continued to surge. That's because over the last two decades, small and medium scale dairy farms have given way to factory farms that confine thousands of cows in tightly packed facilities.

The average dairy consumer likes to believe that milk still comes from small family farms with cows grazing on hills, but that is now almost completely obsolete.

With the rise of factory farming, cow's milk has become one of the unhealthiest and environmentally unfriendly foods you can consume. Today's average cow is forced to produce six to seven times as much milk as they did on small dairy farms. Cows spend their lives being constantly impregnated in order to produce milk. They are also fed hormones which are designed to increase milk production, and antibiotics to keep them well under the unsanitary conditions they are forced to live.

If that wasn't enough, dairy farms are destroying our environment. New research warns that without radical changes to our diets, the food industry alone is likely to cause an 80% increase in greenhouse gas emissions by 2050.

Cows produce large amounts of methane as part of their normal digestive process. They can produce up to 150 billion gallons of methane per day. In addition to that, when cow's manure is stored or managed in lagoons or holding tanks, methane is also produced.

Methane warms the earth's atmosphere 23 times as much as does carbon dioxide. The United Nations Food and Agriculture Organization stated that cattle have a greater environmental impact than cars and trucks.

Unfortunately, the methane problem can't improve because the amount of cows for animal agriculture is increasing because of the growing demand for dairy and meat all over the world.

China is creating one of the largest dairy farms on earth and Argentina, Brazil, New Zealand and Australia have more cows than people.

So what can we do?

We can stop consuming cow's milk for a start. I know we have been taught our entire lives that we need to drink our cow's milk but that doesn't make it true. Better sources of calcium include dark leafy vegetables, dried fruits, nuts, seeds, beans, non-dairy milk and lentils without the fat, hormones and calories. You can read more about the health benefits of giving up milk here.

And you don't have to give up milk. Non-dairy milk is delicious, low-fat and has no added hormones.

My brand of choice is Silk unsweetened original almond milk. I use it for cereals, coffee, tea, in my baking and I even make creamy salad dressings with non-dairy milk. It's only 30 calories per serving, with no added sugar. Oops, I shouldn't forget calcium.  Silk's unsweetened non-dairy milks have more calcium and Vitamin K than cow's milk. It's also low-fat, sugar-free, lactose-free and pesticide free.

You can sign up for the Silk newsletter for recipe ideas. Here is their store locator just in case you are having trouble locating Silk products.

I promise switching to a non-dairy milk will be one of the best decisions you can ever make for your health and the environment.

Don’t miss any of Ordinary Vegan’s free recipes by signing up here. Learn more about health, wellness and nutrition on my newly launched podcasts on my website or in iTunes.

This is a sponsored conversation written by me on behalf of Silk. The opinions and text are all mine.